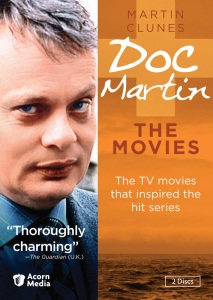 Successful London obstetrician, Dr. Martin Bamford (Martin Clunes) takes his three best friends out to lunch.  He suspects his wife, Petronella (Lynsey Baxter) is having an affair.  Because of a snafu with beepers, he finds out that it’s someone at the table…all of them, actually.  Something snaps and he decides that he’s heading off to Cornwall.  His first contact is Mitch (Mark Heap), the taxi driver, who runs out of gas driving Martin into town.  Then he meets Harvey (Tristan Sturrock), who becomes his friend, confidant, and host crab fisherman.  There’s also something funny going on in town where all the dirty laundry is aired by a Phantom who leaves jellies (formed gelatins) with bits of evidence encased therein.  He’s confused, but finds a great deal of happiness here in Port Isaac.  Will he return home or has he found a new one?  And yes, there’s a woman (Neve McIntosh).

Here’s an odd one.  This movie, Doc Martin (2001), is based on characters from a movie called Saving Grace (2000) (which is about a gardener that grows pot to save…something) and the subsequent source of a successful TV series of the same name running since 2004.  There are a number of differences between this and the subsequent series.  His name is Martin Bamford.  In this he’s an obstetrician.  He’s much more jokey and personable.  He doesn’t have a blood phobia, instead all his buddies slept with his wife.  And it’s Port Isaac (rather than Portwenn).  So, basically, the similarity is London doctor in Cornwall and it stars Martin Clunes as the good doctor.  Except he’s got hair.

Since this is so dramatically different—and there’s a double meaning in that—I don’t really go through the second-guessing I usually entertain with remakes.  The tone is very different.  The series is about the doctor and his inability to fit in whereas the movie, written by Simon Mayle, is about the doctor and his inevitable love and fitting-in with the townspeople.  The movie is rather similar to Kingdom (2007-09) in that the quirky people provide the comedy rather than the central character.

I usually don’t love things that rely on pure charm and feather-light comedy to keep me interested, but sometimes (probably when I’m in the right mood) it can carry the day.  Though it isn’t all fluffy fun.  The movie takes the cheating wife seriously and it’s not without emotion.  It won’t make anyone cry, but it isn’t the clean break, cry, move on scenario typical of the genre.

Doc Martin of the TV series is easily one of the best characters created for TV and certainly the best I’ve seen out of Clunes.  The character of the movie is pretty darn good too, though of a much more ordinary sort.  He’s lost a great deal of his life and re-examines it in the idyllic Cornish landscape and wants to go back to doing what he loves.  It’s not revolutionary, but Clunes does it so well that it’s believable.  And the more you deal with a cliché, the tougher it is to make it believable.

What I expected was bargain basement production values.  What I got, from director Ben Bolt, was something a couple notches above that.  If you’re making a movie after the year 2000, you don’t really have any excuses for looking cheap.  Your computer probably comes standard with programs that could make your home videos look like the first season of The West Wing if you (really) took the time.  Ironically, it’s for that reason that clarity actually makes things look cheap these days.  This doesn’t look cheap.

The sequel, Doc Martin and the Legend of the Cloutie (2003), has the Doc chicaned by rival buyers (Anna Chambers) out of a cottage he really likes (for some reason).  Therefore, he goes about undermining his rivals using the Beast of Bodman, a local legend that frightens his rivals’ young daughter.  Meanwhile, something dodgy is going on in the village with Charlie, the pub owner.  Antics ensue and the Doc is there to help.  Again, this isn’t the Doc of the TV series, but a happy friendly one (albeit with a slight wicked streak).

You can see the TV series more clearly in the sequel.  First, the story is less concerned with creating a single, whole film as it is with making something fun for the audience—an audience already familiar with the characters and their general motivations.  Really, this is less a movie sequel than an extended serial.  Apparently, the deal was similar to those for Wallander and Sherlock with the BBC, for two “movies” per year.  It’s a very short leap from there to making a traditional, six-episode, one-hour series.  The tone and structure, again written by Simon Mayle, is also much closer to the series with more silly, charming characters who have problems that need sorting out.  But, instead of medical ailments that the Doc finally uncovers and treats, these are more in the way of problems any member of the community might help in resolving.

As the cover says, “Thoroughly charming.”  I think it’s worth purchasing for under $10.  But that won’t happen so long as Acorn is the sole producer–they don’t even have a Region 2 version.  But I am even more encouraged to check out Reggie Perrin.