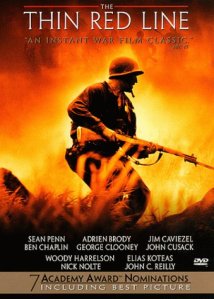 In this world a man, himself, ain’t nothin’ and there ain’t no world but this one.

The Thin Red Line (1998), directed by Terrence Malick, is a pretty incredible movie.  It has a cast list that reads forever with once and future leading men.  It allows the audience to enter the minds of six or seven of them from varied backgrounds and ranks.  It runs for ten minutes shy of three hours and it doesn’t wear you out–or at least, not if you start watching at 9:00 am on a Sunday.

The film runs in roughly two parts: a battle at Guadalcanal and a river patrol, with the former taking up better than two thirds of the film.  It all takes place in the Pacific theater of World War II.  There are acts of bravery, of less-than-bravery, and some people completely lose their minds.  That’s my synopsis.  It could be more detailed, but what’s the point? 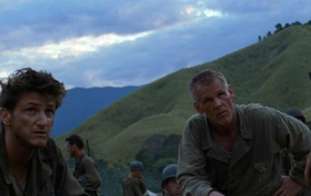 What might actually give you some insight into the film is a list of the characters.  Pvt. Witt (Jim Caviezel) is the mainest character who is a believing, existential hero of a sort.  He’s not exactly all-good and I’m pretty sure he’s got some unhealthy desires to be around dying people, but we come to know him and trust him.  1st Sgt. Walsh (Sean Penn) doesn’t believe and provides us with an anchor throughout.  He is good, brave, and sane with enough authority to control something of his own existence.  Lt. Col. Tall (Nick Nolte) is the closest thing to an arm-chair soldier in the film.  He’s old and this is his “first war” and his opportunity to advance.  These are the main characters.  Then there are the many grunts and occasional officers that come and go, die or survive.

Of the three Malick films I’ve seen, this is easily the best.  The characters talk and think aloud, which is refreshing.  It is also easily the most accessible.  The kind of heavy drama that war provides gives him fairer warrant to philosophize through the characters.  Days of Heaven (1978) is more mundane or ordinary in its context and asks us to sit and think on the big picture.  Death without war or without even crime like Badlands (1973).  That’s too much to ask most of the time.  Death and war, though, is something easier to ponder.  Maybe it’s because it’s so far from most of our lives, I don’t know.

Malick writes and directs the film well.  I imagine I could watch it three or four times without exhausting its content.  His actors give career performances to a man.  Except for Clooney who’s there for all of two minutes and gets his name on the cover of the DVD case.  He’s not bad, how could he be, I’m just disgusted with the cynicism of it.  The music is fantastic.  Hans Zimmer is one of the best out there and he does the full spectrum of filth to art.

To compare this movie with Saving Private Ryan (1998) is probably wrong.  The difference between fighting in Europe and the Pacific is pretty significant.  While Saving Private Ryan can be said to be about war and death as well, The Thin Red Line has the backdrop of a rain forest which provides a deeper philosophical question about nature and humanity than the destruction of civilization happening in Saving Private Ryan.

As for the question of whether this is anti-war is also, I think, to miss what the movie can say.  All war movies are anti-war if you come into the theater thinking wars are terrible, unjustifiable things.  That is, if the movie portrays the violence with any kind of honesty–and most do because honesty is gritty and grit is gold in Hollywood.  I think this movie says more about people under extreme stress and faced with unceasing tragedy beyond “war.”

I’ve owned this movie for years and I just broke it out of its plastic wrapper today.  I’ve always thought I’d watch it when I was “in the mood” for a deep-thinking war movie.  That was folly because being in the mood for a deep-thinking movie will probably never happen.  You should see this movie when you are in the mood (and have the time) for a war movie full stop.  You want to watch some people die in a historical drama?  Put in The Thin Red Line.  At least then you won’t have wasted your time.