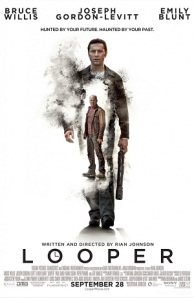 Have I talked about time travel here before?  Surely I have.  That’s right, it was the Men in Black 3 (2012) review (was that only four months ago?).  Well, Looper (2012) isn’t your franchised, shark-jumping, who-cares-so-long-as-it’s-Will Smith kind of movie.  It’s an original, mind-jamming, Joseph Gordon-Levitt-is-so-dreamy-even-with-a-prosthetic-forehead, wham-bam but take it kinda serious kind of movie.  And that means we need to get this straight.  In typical time-travelling logic–and I mean typical as in linear–all things have happened.  If I cut off my finger, my future self has no finger, when I see my future self, he will have no finger, if I see him before I cut my finger (on my present self) he will still have no finger.  He will not lose his finger after I cut off my finger if I cut the finger from my present self in his presence.  Obviously, right?

Now, I know you guys want to get all fancy and metaphysical–when you really just mean physical–and say that once the future self comes back there is no necessary forces keeping your present self from doing things differently than what your future self tells you his past self had done–that is, “Hey, I didn’t cut my finger off,” sayth future self of past self.  “Oh yeah?” challenges present self.  And present self chops off the old digit.  Then, of course, future self in the present should have his relevant finger disappear.  Wrong!  If we’re going to mess with the space-time continuum, what makes you think that your physical presence has anything to do with time?  Future self would hold up his otherwise immaculate hand as if to say, “You’re only hurting yourself.”  Matter may neither be created nor destroyed only concentrated and dissipated.  To go back in time is to violate this law of physics.  Looper does not believe in physics.  But neither do you, so I guess I’m spitting to windward.

It’s 2044.  Time travel hasn’t been invented yet, but, in the future, it is.  It was instantly outlawed and is only used by very powerful organized criminals.  Because of tracking systems, it’s basically impossible to dispose of a body in the future.  So they send back their victim, an assassin kills them at the prearranged time and place and disposes of the body.  These assassins are called Loopers and are well paid to perform roughly the same kind of task as those sadistic twats of our own time that shoot caged animals.  Joe (Joseph Gordon-Levitt) is a looper.  He picks up his blunderbuss, goes to the place, checks his watch, arrives his prey, bang, get the silver off the target, convert it into cash, convert the cash into drugs, take the drugs, have a party, wake up, go pick up the blunderbuss.  The first of many loops.  The contract is that, because this is so secret, a looper will shoot a target and find a rack of gold on the target.  That means that the target was the future-looper.  This is called “closing the loop”.  [This is all exposition, so fear not for spoilers.]  The gold is your final payout and starts the clock on your thirty years of remaining life.  One day, Joe is waiting and his future self (Bruce Willis) appears.  Shocked, present Joe hesitates and future Joe takes that opportunity to escape.  There begins a fast and complex network of events that bring our Joes into contact with Abe (Jeff Daniels), the gangster of the future sent back to run the loopers, Sara (Emily Blunt) and Cid (Pierce Gagnon), a farmer and her son who has some serious anger issues, and a host of others.

What gives me elaborate pause is the many kinds of stories in Looper.  It is, at heart, a sci-fi with an emphasis in time travel.  Then there’s a Terminator-style love story brewing with notes of Terminator 2 father-son dynamics.  Then that seemingly pointless, extraneous sci-fi element comes back into the extremely-important category in the last ten minutes.  It also dives (as though from great heights) into heavy action.  The action runs along a sliding scale with gore and numerosity on either end–that is, highly bloody and individual or shoot-and-fall five at a time.  But always carnage.  Action is intended to be the emulsifier, but only competes in tone with the thoughtful philosophical questions the Joes struggle with.

Is see these all as distinct elements belonging to their own films or, at most, limited to a single matching pair.  This is because, and Looper bears this out, the shifts are always hard and fast and surprising.  That’s usually a bad thing.  Counter this with the beautiful-violent shifts in a movie like Drive (2011) that were fast, but binary and matching which creates a back and forth rather than round-and-round.  However, the pace is so quick that Looper gets a pass on the first viewing.  I imagine a second viewing would be far less forgiving.

Spoiler Ahead (drop down two paragraphs if you haven’t seen the movie).  The worst match is the dueling sci-fi elements.  In 2044, Kansas has gone way downhill, and along with the loopers are these “TKs”–people with telekinesis (move things with their minds)–but their powers are very weak.  So it’s introduced like a little detail (and I forget the rule of the gun on the wall) so I let it pass.  Then, out of the blue, Cid is like Phoenix from X-Men: The Last Stand (2006) and this is like an important thing.  In the future, they discover time-travel, which consists of going into a decorative kiln and baking into the past.  I see these as a clash of myths–the science and the fiction.  Mutants and gritty-realish tech compete for disbelief suspension much like the mostly realish Total Recall (2012) competed with the random introduction of the three-breasted lady (i.e. mutation) which was theretofore absent.

A common misunderstanding of logic is to conflate validity with soundness.  A valid argument has a true conclusion given its premises are true.  The formula is valid.  A sound argument is valid and true.  With fiction, we accept the truth of the premises (e.g. time travel) and therefore accept the intermediate conclusion (loopers) and then the final conclusion (the resulting conflict between present and future selves).  But the TKs are irrelevant to time travel and are, therefore, illogical to what I thought was the story.  Neither aspect of the story grows out of the other (time travel and mutation).  Beauty and violence, by comparison, do waft in the same milieu and to connect them is to comment upon them logically.  And logic is a language we all implicitly understand and we notice when violations occur (disbelief reinstated).

What writer/director Rian Johnson accomplished, however, was to bring this mash of illogic far further into acceptable viewing than anyone has a right to do.  He did so, for me, by confusing me so severely that I didn’t have a moment to reflect upon the strangeness.  I felt the strangeness but had to let it go to keep up.  Johnson creates two parallel stories that run so closely together that I was almost fooled into thinking it was only one.  I’m inclined to believe that this confusion was intended rather than simply using a neat literary device to formulate points and meta-points.  There is much to Johnson’s writing that is neat and flavorful.  His dialogue is far above average–“It’s like this whole town; big heads and small potatoes.”–as is his visual style.  But his structural eye is questionable in Looper.  There are the competing elements which are all filmed in competing ways–bright, well-staged landscapes against gritty depression-wreaked urban area against vivid club scenes against black but glittery gun violence–that further segment the movie.  As I think back, I also wonder whether a serious time-related error occurred (and not just a quibble). That said, I cannot fault him for lack of ambition.  He reached for something imaginative and fascinating and grasped most of it.  A significant achievement.

Further achievements belong to Gordon-Levitt, Blunt, and Gagnon.  Bruce Willis gave a fine performance not unlike the vast majority of his recent characters that are tough and slightly annoyed.  Jeff Daniels is a total scene thief and so entertaining.  But Gordon-Levitt played the role very well and out-Willis’d Willis.  That smooth, confident stare with an ambivalent, anti-hero morality is so appealing in his hands.  Emily Blunt played a strong character with depth and thoughtfulness.  Gagnon as the young Cid was incredible.  Children are often quite good when playing the mentally unhinged and Gagnon is right among the very very good.  Both scary and endearing.

The movie is well worth watching.  It’s fast-paced, exciting, and engrossing for those interested in more complicated narratives.  Don’t expect any Oscar nominations to go its way, but do expect a far better than average good time in a thinking person’s action film.  If you go, make sure to keep your eyes on.

P.s. What idiot put around the idea that this is about Bruce Willis going into the past to kill himself?  It isn’t, they were wrong, everyone remains roughly sensible insofar as usual human motivations are concerned.

Beware of quite ghastly violence and a few scenes of shocking gore, but none of it believable enough to be upsetting.