Morse, everyone just calls me Morse.

DCI Morse (John Thaw) is the prickly, classical-music loving, educated, snobby, crossword-solving detective who investigates the incredibly over-abundant murders of Oxford.  Helping him in this is the dependable, loveable DS Lewis (Kevin Whately).  If you find yourself in a Morse mystery, try not to be a slightly attractive woman in her forties.  If you are, you’re probably the perpetrator or the victim.  His travails with the ladies is only rivaled by his runnings-into with college dons and professors.

Based on the books by Colin Dexter, Inspector Morse is probably second only to the Jeremy Brett Sherlock Holmes series in quality of character.  Here’s a show where you’ve got two characters with great chemistry, a gorgeous town, and (due to Morse’s taste in music) one of the best soundtracks you could ever hope for.  I’ve watched them over and over and over.

The forlorn flatfoot from Fife, the sour Scot sleuth, the ridiculously rational Rebus (Ken Stott).  He’s a bit like a Scottish Morse (see below).  He has trouble with the ladies, he’s got a sharp wit, a caring heart, and a fondness for the drink.  He’s aided by the lovely DS Siobhan Clarke (Claire Price)–the first place I learned the “SheVON” was spelled as it is–who is loyal, concerned, and oddly not romantically inclined towards our plump policeman.  Constantly annoying the higher-ups with his determination to annoy every suspect, rich person, or government official he comes across.

Wonderful.  It’s really Stott that makes the series, I think.  There was another series,  based upon the books by Ian Rankin, staring John Hannah as the detective, which was more in the Wallander line.  It suffered from the limited use of DS Clarke (and lack of Claire Price).  This rendition, however, gives you a stronger showing in production and intrigue.

Note that the Stott series is technically series 3-5 (with 1 and 2 going to Hannah), and these being the prices noted below.

The Adventures, Return, Casebook, Memoirs and Films of Sherlock Holmes (1984-94) 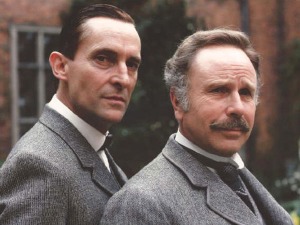 You mentioned your name just now as if I should recognize it but I can assure you beyond the obvious facts that you are a bachelor, a solicitor and a Freemason, and an asthmatic, I know nothing about you whatever.

Sherlock Holmes (Jeremy Brett) is the genius of observation and deduction.  His friend and  colleague Dr. John Watson (David Burke/Edward Hardwicke) is invariably loyal and occasionally useful.  And then there’s the long suffering housekeeper, Mrs. Hudson (Rosalie Williams) who is, perhaps, the greatest supporting character of all mysteries (due to her being, perhaps, the only known supporting character of all mysteries).  Holmes is the worlds only consulting detective, a private investigator par excellence, who will beguile you with his amazing deductions and figurings-out.

He is also the first oddity of detectives–given that the genre was 40 years old at most when Conan Doyle wrote the things, that’s not surprising–with a dry wit and lack of human emotion.  Holmes remains the very best of all detectives in character and skill and this series the undisputed (in my mind) best adaptations of the stories.  Here, Watson is no oaf, but just a normal who tolerates Holmes’s whims and turns-tacit.  Then, of course, you have some excellent stories upon which to base the series.

If you’ve never seen these shows, you’re in for a treat.  These shows constitute approximately 40 hours of television greatness–well, let’s call it 38 hours of greatness, 2 hours of goodness.  In ten years, Brett gained, I’d estimate, about 70 pounds due to a number of ailments.  This is the gold standard.

It’s Sherlock Holmes (Benedict Cumberbatch) transplanted into the 21st century.  Whatever doubts you may have had before you started watching, from the opening sequence, you know it’s going to work.  Dr. Watson (Martin Freeman), like his 19th century inspiration, is late of the Afghan campaign, holding curiously migratory war wounds, and is a bit of a lady’s man.  Cut out the interesting Mrs. Hudson (Una Stubbs) and replace her with an incredibly terrific Moriarty (Andrew Scott), a far more present Mycroft (Mark Gatiss), and a sympathetic Lastrade (Rupert Graves) and you’ve got Sherlock.

The show relies, to some extent, upon your knowledge and love of Sherlock Holmes lore or, at least, rewards you terrifically for said knowledge.  It’s almost a comedy it’s so funny, but it’s a mystery and we’ve got our genius back for the 21st century.  What this show has, much like the one above, is terrific casting.  In a way it’s all you need, but that won’t get you into the top tier just for that.  No, this show also has fantastic writing from creating almost entirely original stories that actually make use of a detective’s powers of detection rather than just running around until the clues line themselves up.  It’s the difference between walking around what you’re looking at and turning the thing itself.

I’ve tried, usually after a marathon of the Jeremy Brett Holmes shows, to do a little deducing of people around me on a train or whatever.  I know his methods, you might say, and I went about putting them into practice.  What you might realize rather quickly is that what Holmes has (and I, and probably you, don’t) is a very large catalog of transitional conclusions that tell you what the wrinkles on a jacket mean. 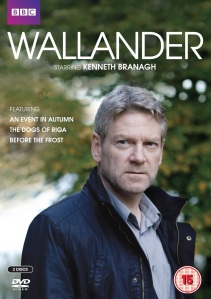 Kurt Wallander (Kenneth Branagh) is a moody cop–aren’t they all–in Ystad, Sweden, a beautiful idyll that seems to be a magnet for violent crime on an international level.  His life is a mess and his usual mode of going to sleep includes a box of wine and a cell phone wake-up call–just like Rebus, in fact.

This show is a little different, however, in its production and emotion.  Every image is a beautifully constructed picture.  Wallander takes every case incredibly personally and drags his soul over the coals at almost every turn.  This thing is freakin’ loaded with ennui.  Also the music, from the opening credits to the end is the best original work you’ll hear.  It’s heavy, but beautiful.

There has been some deterioration in the third series, but not enough to make me question its place in the first tier.

Mm? Oh, Mum was classic delusional. Desperately believing in only the good… it was a natural defense against her fear that Dad had fallen out of love with her. Yeah, she didn’t realize he just had difficulty in expressing it.

Our hero, a psychologist, is flawed in that he’s a bit weird.  Dr. Tony Hill (Robson Green) is a brilliant, intuitive, and probably mildly autistic clinical psychologist that profiles, interrogates, and investigates murders and murderers.  His specialty is getting into the minds of killers.  For three series he helps DI Carol Jordan (Hermione Norris), who suffers from the same workaholism as Tony, and then for another four DI Alex Fielding (Simone Lahbib), who doesn’t.  He’s good at what he does.  The show does take a downward turn when Fielding comes on board and the police station goes from functional to something out of NCIS: Los Angeles, but as long as Robson Green plays Tony Hill, it’s a show to watch.  Oh, it is a little gruesome, so beware of that.

This is the only series of the top tier that has a bad soundtrack.  In the opening credits, the fiery burning-away of each title is completely irrelevant to any of the episodes and not reflective of the tone of the show.  I can’t even imagine what that meeting was like.

What is with these price differences?  They’re laughable in their differences and annoyingly high.  With a sitcom–admittedly shorter in time and cheaper to make–you’ll come across a number of them that are £5 or thereabouts.  Perhaps I have no sense of their actual popularity either here or abroad.  Still, Wallander shouldn’t be almost $30 for a single season.