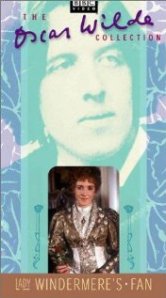 I can resist everything except temptation.

Oscar Wilde.  The name inspires many thoughts, I’m sure, about wit and humor.  He was a one-liner machine both in his works as well as in conversation.  He is so often quoted, I wonder if he wasn’t a guerrilla stand-up comedian performing his routine in society.  Society is the single target of his plays and his novel The Picture of Dorian Gray.  His well-known fall from social grace tends, in my opinion, to overshadow what makes Wilde so great, which is his work.  I say this because in the one review of this production Lady Windermere’s Fan mentioned how the dialogue about what being an outcast in society is like and how this comes out of Wilde’s experience.  The problem is that the play was written years before his trial and exile from society.

Lady Windermere, played by Julie Andrews look-alike Helena Little, is awfully puritanical.  She is pure and innocent and heading for scandal.  Her friend, Lord Darlington (Kenneth Cranham), who loves her half-secretly, hints and the Dutchess (Sara Kestelman) says outright that Lord Windermere (Tim Woodward) has been carrying on with a certain Mrs. Erlynne, played by Kate Hudson look-alike Stephanie Turner.  Lady Windermere is astounded by the news and even more so when her husband requires Mrs. Erlynne’s presense at our lady’s birthday bash that night.  He says she is a wronged woman but society has bestowed upon her an evil name.  She is a bad woman.  It appears that Mrs. Erlynne has some hold over Lord Windermere, but it isn’t clear what it is.

Lady Windermere’s Fan (1985), a play written by Oscar Wilde in 1892, four years after his first fictional publications and three years before his final and most popular The Importance of Being Earnest was performed.  All before his trials.  Very little new material followed.

Nowadays to be intelligible is to be found out.

I say Wilde’s work is great because it is.  It can certainly be compared favorably with Dickens or Shakespeare.  Watching a short biography (included in my DVD set) someone said something about The Picture of Dorian Gray that I hadn’t quite realized.  The story is original and yet ancient in its tragedy.  It’s like Narcissus fleshed out by Grimm but expressed entirely by Wilde.  If it feels to us like convention, it is only because it is timeless.  That is great.

Crying is the refuge of plain women, but the ruin of pretty ones.

But one work does not a great make.  I would be willing to rest on The Importance of Being Earnest (2002) and An Ideal Husband (2009), which were the only others I’d experienced, but I can now point to Lady Windermere’s Fan for something more mature.  It seems odd that an earlier work is more emotionally mature.  I expected characters to remain stock-still with villains, wits, and unclean motives, but got only one out of three.  I expected a rehash of An Ideal Husband (two years before it was written), but instead found some real character development.

To compare him with Shakespeare takes some nerve, but I might soften it by comparing his plays only to the comedies.  Wilde had a century and a half of the evolution of individualism on his side, but he can bring the form of Shakespeare’s wit (and multiply it) while also fleshing out the bright character in its mindless place of London society.  Once I acquaint myself with Shaw, I’ll let you know if I think it is exceptional.  Whether it is or not, I know my reaction and I shouldn’t be tricked into thinking it is less beautiful because it is common.  Nature supplies my similies.

We’re all in the gutter, but some of us are looking at the stars.

When I watch a play on DVD, especially from someone I know I’ll admire, there’s a great deal of movement in my mind.  I’m swimming with and around the actors to get the dialogue and fit it to my expectation.  It’s so much easier to understand than Shakespeare, so I’m more able to adjust it to my own ear.  Swimmer’s ear?  Stop it.  For Shakespeare, I hear Branagh, for Wilde, I hear Everett.

On the whole, I would say about half the swimming was upstream and half down.  They were too subtle for their own good.  I can understand the difficulty.  You’ve got a rather mature piece on your hands and you don’t want to play up the cheeky wit.  There is a fine line and this production strayed into the obtuse side of it more often than necessary.  Not far enough to sink things, but enough for me to criticize.  I came away with a deeper appreciation of Wilde, right?  So it couldn’t have been bad at all.

What is a cynic?  The man who knows the price of everything and the value of nothing.

If you’re going to film a play, there is a very low bar.  I don’t know that I’ve ever seen one that was as seamless as a produced movie can be.  Some of them try with greater or lesser vigor.  This one was quite vigorous, going so far as to close-up on someone’s mouth to underline gossip.  If I’m not mistaken, they used multiple cameras (rather than reshooting scenes).  That makes continuity a dead certainty.  The problem is that the audience is less in the middle of things, less involved.

Seeing someone do it so well so recently in Carnage colors my perspective.  But also seeing it done so well in An Ideal Husband (1999) tells me that they should all be done this way.  But that’s wrong, ultimately.  Everyone should have the opportunity to see these plays acted—which is superior to reading them (if you read them only once)—and that means television and that means cheap.  So I’ll forgive this one and recommend the collection to you all.