So, you’ve gotten a little guidance on SitComs yesterday and now you’re ready to see my first tier of British SitComs.  You’ll see that the program heading links are to Amazon and the actors are to IMDB.

For the following programs, if I haven’t gotten you interested, then I have failed miserably.  These shows are the best of British SitComs (and, therefore, really, the best SitComs) of all time.  You may think that shows I’ve put in other tiers, even the dreaded Tier 5, deserve a place up here.  Well, different strokes. 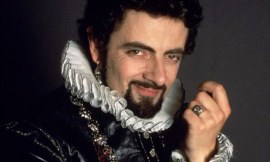 Each series takes place in a different historical era with Edmund Blackadder (Rowan Atkinson) and his faithful dogsbody, Baldrick (Tony Robinson)–or their descendants–as central characters. The comedy specializes in the elaborate simile and making fun of historical figures.  After the first series, they decided to change Edmund Blackadder from another one of the idiots to the cunning schemer who occasionally gets his own way.  The dialogue is sharp and witty and the characters are brilliant.  It also showcases some of the other wonders of the BritCom world in Stephen Fry (in the latter three series) and Hugh Laurie (in the latter two series).  Also, Miranda Richardson as Queen Elizabeth I is pretty much priceless.

This show is consistently good and entertaining for all.  It blends the best of British performance (including the physical side) with the wordier sort of British writing.  It’s also an allusion factory that teaches you history–of a sort.  Ben Elton is the co-creator and a part of the lengthy partnership with Atkinson.  One of the greatest. 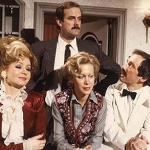 Basil Fawlty (John Cleese) runs a hotel on the seaside of Britain.  This he does with the aid of his wife Sybil (Prunella Scales) and the help Polly (Connie Booth) and Manuel (Andrew Sachs)–he’s from Barcelona.  The service industry is tough work and there are, apparently, no end of troubles.  Improving the clientele, keeping the cook sober, not killing your nagging wife, dealing with builders, the list is endless.  Oh, and some kids seem to take endless pleasure in rearranging the letters in the sign out front.  Although I would class it in the zany category, it is a classic that is both physical and yet not low brow.  Basil is forever throwing tantrums, Sybil is always badgering him to fix something that’s gone wrong with the place, and Manuel is forever screwing up with his English or his duties.  I’m not sure what Polly is doing.  Working, I guess.

This show gets into the top tier mostly through popularity.  While it isn’t my favorite, I accept that it is probably one of the most accessible and lightly-entertaining.  A fine show. 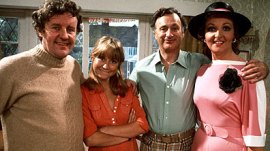 The Goods, Tom (Richard Briers) and Barbara (Felicity Kendal), are breaking out of the system and going to farm suburbia in their attempt to leave the droning existence of modern middle class life.  Their best friends and neighbors are the Leadbetters, Jerry (Paul Eddington) and Margo (Penelope Keith) who are firmly in the mainstream.  Good Conservatives, Jerry’s an executive, Margo is in the musical society, that sort of thing.  They make it work.  In a way.  But for us, they make it work absolutely.  They’re the best friends you’ve ever fictionally had.

This is probably the best British SitCom you will ever see.  The characters and situations are so charming that words cannot describe.  At the same time, it is extremely literate, moving, and hysterically funny.  It really is an all-rounder.  It’s $23 on Amazon.com and free to stream if you’re a Prime Member.  Do yourself a favor, you won’t regret it for an instant. 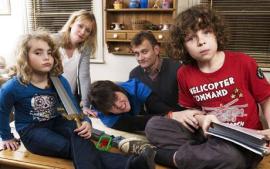 Pete (Hugh Dennis) and Sue (Claire Skinner) try to keep up with their three young children Jake (Tyger Drew-Honey), Ben (Daniel Roche), and Karen (Ramona Marquez).  Jake is a shyish adolescent going through that unpleasantness of puberty.  Ben is a chronic liar and walking disaster area.  Karen is the grand inquisitor asking the kinds of questions that parents dread–they may sound simple, but they call on a degree of knowledge most of us fail to have.  As odd as they are, calling them dysfunctional is probably both over and understatement, and they still seem to play the straight man to society.  There’s really no better social commentator than inquisitive children.  “Mum, why do…” is the phrase that should make us all shudder and wince.

It’s a strange thing, but to say this is the best family comedy I’ve ever seen doesn’t really do it justice.  Here’s a subgenre that should have loads of brilliant examples, but really only includes legions of mediocrities.  What separates this, I think, is both the fictional parents and the writers actually treat the children with respect.  You can tell that the writers have listened.  I think you’d be stumped to find another example.  Absolutely fantastic show and has the distinction of being watchable with the whole family (and everybody getting it).

This is the first show you will have to get on Region 2 DVD or, of course, by less official means.  The prices are so low, they’re insane, so you don’t need to go that far. 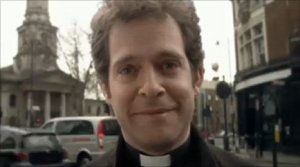 Rev. Adam Smallbone (Tom Hollander) is trying to run St. Savior’s of the Marshes, a church in the bustle of London.  It’s a challenge.  The numbers are down and the only thing going for it is the church school, run by the lovely Ellie Pattman (Lucy Liemann).  The Rev. also gets support from the semi-psychotic Colin (Steve Evets), who I expected to be a severe annoyance, but his “Morning, Vicarage” turns out to be third only to Hollander’s charm and Liemann’s … uh … in things that make me consistently smile.  Well, I guess with Liemann it’s less of a smile and more of a leer.

The show is incredibly charming and Hollander is such a sympathetic character.  While its urban setting provides for some very un-religious activity, it is interestingly more concerned with religious questions than you might find in some other shows we could mention.  You will enjoy this, I guarantee it. 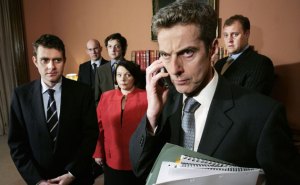 Sometimes it’s nice to hear a string of incredible, inventive cursing once in a while.  Boy does Malcolm Tucker (Peter Capaldi) provide.  It’s like The Office meets an uncensored episode of Hell’s Kitchen.  Billed as Yes, Minister for the new century, the Prime Minister’s message man–a thinly veiled Alastair Campbell–Malcolm Tucker (Peter Capaldi) runs around enforcing his iron will on every idiot minister that gets in his way.  His way is broad and often changes course, so that can make things confusing for minions wishing to remain alive and free of teeth-marks.

To say that this is Yes, Minister for the modern century and for that modern century to implicitly mean PR and spin would be both to suggest the Civil Service is not the enemy anymore (and the media is) and that spin wasn’t around back then (and bureaucracy is just something Tories hate).  Both are terribly in error and I imagine the people who made the comparison either haven’t watched Yes, Minister, didn’t understand it, or confuse politics with government.  This show is about politics.  It’s so vicious and the government people are so spineless and inept that I get a little exhausted with it.  But it’s just so funny. 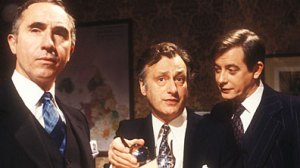 Jim Hacker (Paul Eddington) has won reelection and his party has gained a majority.  It’s time for the PM to dish out the prizes (ministries), so what will he get?  It’s the Department of Administrative Affairs, a graveyard of political ambition.  The head civil servant, Sir. Humphrey Applebee (Nigel Hawthorne), is a genius of obfuscation and delay.  Hacker’s personal private secretary, Bernard Woolley (Derek Fowlds), is a young civil servant with very seriously divided loyalties.  Hacker will want to do something, Humphrey will not want to do something, something will probably not be done.

I will admit that this is controversial for Americans (perhaps even for Brits, I don’t know)–it is easily the wordiest comedy I’ve ever encountered.  Myself, I say it is the best of them all.  It is sharp as a tack and dry as the finest ginger ale.  It is political humor that has virtually no reference to party political issues–so I guess that makes it government humor.  As Hacker says, “The Opposition isn’t the opposition…  They’re only the opposition-in-exile. The Civil Service is the opposition-in-residence.”  That joke, that one just there, is a kind of synopsis of the show.  Hacker has to deal with politics to stay alive and the Civil Service is there to give him as little help as possible.  Yes, you’ll have to strain a touch through the first episode, but from there on out, you will love the characters and take joy in the great game.  Also, the opening titles are, without a doubt, the best of all time.

Great, so that’s the first tier of British SitComs.  I hope you will come back and check out Tier Two tomorrow.